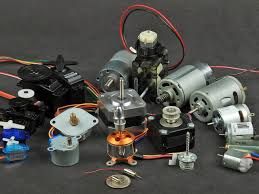 The Ultimate Guide About The DC Motors

Every electrical appliance is equipped with a motor which helps majorly with the operation. Talking specifically about the DC motors, they are found in most electronic devices. From toys to washing machines, the rotary electrical machines with the DC motors basically convert the direct current electrical energy into the mechanical one. They vary in size as well, as per the size of the system. DC motors have recently acquired much popularity in the electronic world and all because of their efficient performances and versatility. Let’s comprehend everything about the DC motors in this article.

The Invention Of The DC Motors

Thomas Davenport was the leading person in the US who created the first DC motor. This invention has revolutionized the life of every individual in this world. In 1837, he patented the motor; however, there were others before him as well who have worked on it. There were several inventors in Europe who are known to develop the most powerful versions of the electrical motors before Davenport, but he was the lucky person to patent it first. For instance, Sibrandus Stratingh and Christopher Becker were some of the first discoverers who even demonstrated an electric motor in 1835 by running a small model automobile.

Fran Julian Sprague was the first person to invent the DC motor in 1886. His discovery reshaped the industry in a very advanced manner. The foremost application of these motors was seen in the electrical elevators and the powered trolley system. This was marked as one of the most notable gains in the manufacturing world.

Working Of The DC Motors

Stator and armature are the two key components of the direct current motors and which makes their working possible. The station component, stator, renders a rotating magnetic field, and this field is what makes the armature revolve.

Generally, there are unmovable sets of magnets in the stator and a coil of wire in even the most uncomplicated DC motor. The electromagnetic field is generated as the current is constantly running through the wire. It is seen aligned in the middle of the coil. Moreover, to strengthen the magnetic field, there are more windings of the insulated lines enclosed around the motor core.

Now the windings are linked to some rotary electrical switch that applies the electric current to these windings. It rejuvenates the armature coils, which eventually produces a rotating force known as torque. The coils are powered off and on in order, creating a revolving magnetic field. This field communicates with the other fields of the stationary motor to generate torque. This gyratory movement assists with the direct conversion of electrical energy into a mechanical one. This conversion is employed for the thrust of objects.

Furthermore, it is crucial to note here that all these performances are controlled by a DC motor controller driver. This controller manages the starting and stopping operations, as well as the change of revolving directions, but most importantly, it prevents any electrical faults in the system.

Applications Of The DC Motors

From the tiniest to the biggest, DC motors have found their place in myriad appliances. Let’s look at a few of its top applications in various systems.

Most of the traditional fans are equipped with AC motors. However, the novel ceiling fans that are hitting the markets these days have DC motors in their systems. Dc motors are known to be more economical as they are energy saviors.

Hydraulic pumps are one of the most critical tools in various industries, including mining, manufacturing, plumbing, and construction sectors. The variable speed control and efficient performance in terms of response make the DC motors apt for this high-tech system. Because of this effective system, they are low-maintenance.

DC motors found in toys are the best learning equipment, especially for electrical engineering students. Model trains and remote-control devices are the most popular examples where a DC motor is usually found. These are rugged and very easy to use.

Another most popular application of DC motors is found in automobiles. Electrical cars equipped with DC motors are known for their robustness and high efficiency. The car enthusiasts and professional manufacturers always prefer the huge DC motors for these vehicles as they generally have a high starting torque.

Robots are specifically designed to work on a particular task, and the DC motors help with the actuation generally. The high torque and efficient performance of the DC motors is what makes them much suitable for these robots. They basically help with the movement of the arms, tracks, and cameras of the robot.

The efficient performance of the DC motors also makes them apt for electric motorbikes. These bikes generally have a compact DC motor built inside, generally in the hub of the front or the back wheel.

4 Popular Types of the DC Motors

The following are the major types of DC motors; however, there are many other types and variations as well. Have a look at the most popular types below.

These motors have solid-state electronics. These synchronous motors are known for their classic design and high durability. They are also considered the safest. The key thing to note about these motors is that they do not have a commutator but an electro servomechanism instead. This mechanism helps with the detection and adjustment of the rotor.

The brushed motor was the piece initially invented by Frank Sprague. This original piece has a commutator that creates single-direction torque. The brushed DC motors are most commonly found in paper machines, cranes, steel rolling mills, etc.

The shunt DC motors are generally a variety of brushed motors with field windings. The windings of these motors are linked in parallel with the armature. They are specifically used in systems that require constant torque.

The series DC motor is also categorized as a brush motor. In this system, the windings are connected with the series and create faster speeds.